The Park in the Sky 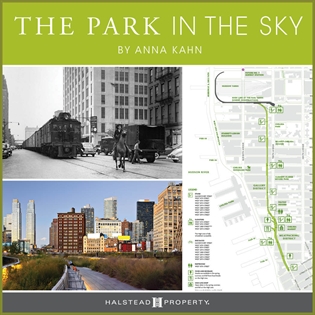 In 1847 the City of New York authorized street level railroad tracks down Manhattan’s West Side on Tenth Avenue to ship freight.  Tenth Avenue became known as “Death Avenue” because so many accidents occurred between trains and other traffic.  The railroads even had men called the “West Side Cowboys” to ride horses and wave flags in front of trains, but the accidents continued.

After much debate on the continued accidents, in 1929 the City, the State of New York, and the New York Central Railroad then agreed to elevate the tracks.  It was a large project conceived by Robert Moses that also included the construction of the West Side Elevated Highway. The 13-mile project also added 32 acres to Riverside Park. It cost more than $150,000,000 (about $2,060,174,000 today). It became known as the High Line.  Following the growth of the interstate trucking business the last train ran on the High Line in 1980.

The High Line today is a 1.45-mile-long New York City park built on an elevated section of the disused New York Central Railroad’s West Side Line. Inspired by the 3-mile Promenade plantée, a similar project in Paris completed in 1993, the High Line has been redesigned and planted as an elevated park. Its construction began in 2006, and the park opened in phases in 2009, 2011 and its final phase in 2014.  It is owned by the City of New York and maintained and operated by Friends of the High Line.

The gorgeous High Line Park runs from Gansevoort Street in the Meatpacking District, through Chelsea, to the northern edge of the West Side Yard on 34th Street near the Javits Convention Center. The park’s attractions include naturalized plantings and stunning views of the Hudson River.  Most of the planting, which includes 210 species, incorporates many of the species that originally grew on the High Line’s rail bed but not limited to American native species. Stretches of track are still there reminding us of the High Line’s former use.

Visitors will enjoy a multitude of activities such as walking tours, fantastic live performances, public art from contemporary artists, wellness classes including Tai Chi & Meditation for adults and art classes and “Lawn Time” with music & stories for kids. On October 24th there will be a fantastic Haunted High Line Halloween with ghost trains and spooky characters not to be missed!  To view the amazing Calendar of Events please visit www.thehighline.org .

The park is open daily from 7 a.m. to 7 p.m. in the winter, 10 p.m. in the spring and fall, and 11 p.m. in the summer, except for the Interim Walkway west of 11th Avenue, which is open until dusk. It can be reached through eleven entrances, five of which are accessible to people with disabilities. The wheelchair-accessible entrances are at Gansevoort, 14th, 16th, 23rd, and 30th Streets. Additional staircase-only entrances are located at 18th, 20th, 26th, and 28th Streets, and 11th Avenue. Street level access is available at 34th Street via an “Interim Walkway” between 30th Street/11th Avenue and 34th Street.