LEARN ABOUT AUDREY MUNSON, AN UPPER WEST SIDE ICON 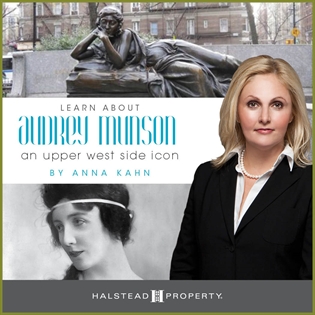 New York City is home to many iconic landmarks and while the Statue of Liberty and Wall Street Bull are widely recognized, lesser-known Audrey Munson is a star in her own right. Munson, considered to be “America’s First Supermodel,” is the inspiration for over 15 statues throughout New York City, many of which are on the Upper West Side. You may not realize it, but you pass Munson every day!

Audrey was born in Rochester, New York in 1891 but was discovered on the streets of NYC in 1909 by photographer Felix Benedict Herzog. At the time Munson was struggling to pursue a career as an actress, Felix introduced her to several artists and she quickly became their muse. By 1913, she had achieved complete celebrity status and was dubbed “Miss Manhattan” which ultimately led to her starring in her first film, “Inspiration,” where she was the first woman to appear nude in an American motion picture.

While many might assume the life of the first supermodel to be glamorous and envied, Audrey’s life was full of drama and tragedy. In 1919, the landlord at her boarding house at 164 West 65th Street fell in love with her and murdered his wife with the hopes of marrying Audrey.  Audrey was not even in New York at the time but was sought by police for questioning, launching a nationwide hunt for her. In 1922, Audrey attempted suicide by consuming mercuric chloride. By 1931, Audrey was put into an insane asylum by her mother where she had no visitors for decades. She died alone in 1996 at the age of 104.

Audrey’s image can be found throughout the Upper West Side at locations such as the Columbus Circle entrance to Central Park, the centerpiece of Columbia University, at the Fireman’s Memorial on 100th Street and Riverside Drive, and at the Isidor and Ida Strauss Memorial on 106th and Broadway. She can also be found at several iconic landmarks in New York City such as on top of the Manhattan Municipal building, in the New York Public Library, and on the Manhattan Bridge.