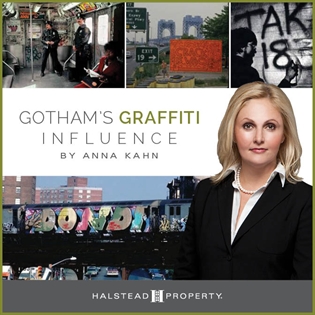 When you think of graffiti what comes to mind?  The New York City Subway during the 1970’s and 80’s is my first image.  Although graffiti in New York City was helped by the subway system, you will be surprised to know that modern graffiti actually started in the 1960’s in Philadelphia.  It was not until after the death of famous Jazz musician Charlie Parker, nicknamed Bird, that graffiti began appearing in NYC with the words “Bird Lives”.  It would still take at least another decade for the center of graffiti culture to shift from Philadelphia to New York where it gained media attention.

The pioneers of modern graffiti in New York City during the 1970s were TAKI 183 and TRACY 168 along with DONDI, Lady Pink, Zephyr, Julio 204, STAY HIGH 149, PHASE2.  Graffiti at that time was most prevalent in Washington Heights.  The writers would add their street numbers to their nicknames and “bomb” trains with their work.   As graffiti writing began to spread from Washington Heights to other areas of New York City the work evolved and the graffiti subculture was born.  The work grew competitive as the City tried to crack down on the artists who wanted to see their names all over the city.

By the 1980s New York’s “war on graffiti” and the Clean Train Program saw an increase in police surveillance on the subways and a roll out of the stainless steel trains.  The last graffiti-covered subway went out of service in 1989.  As the artists moved from the trains to the streets the graffiti became more elaborate with added illustrations full of scenery and cartoon characters to their work.

It was during the 1980s that the debate over whether graffiti should be considered art began.  During this period many graffiti artists also had taken to displaying their works in galleries and owning their own studios. This practice started with the now famous artists such as Jean-Michel Basquiat, who started out tagging locations with his signature SAMO, and Keith Haring, who was also able to take his art into studio spaces.

Keith Haring’s well known 1986 “Crack is Wack” mural can still be seen on the handball court walls of the playground at East 127th St, 2nd Avenue and Harlem River Drive which has been renamed the “Crack is Wack” Playground.  The mural was painted to send a serious anti-drug message to the community which was becoming more dangerous at the time due to New York City’s growing crack epidemic.

Although the “War on Graffiti” continued in New York City through the 1990s and 2000s, the graffiti artists prevailed.  They continued to resort to new ways to express themselves.  At the same time graffiti also entered the mainstream, intertwining with Pop Art and was spreading worldwide. Today graffiti is a respected new art form with no boundaries.

Fantastic graffiti exhibits can now be seen in museums throughout the world including the new Broad Museum in Los Angeles. For a fun gift, fantastic books have been written on the ups and downs of the amazing artists and their history rich movement.