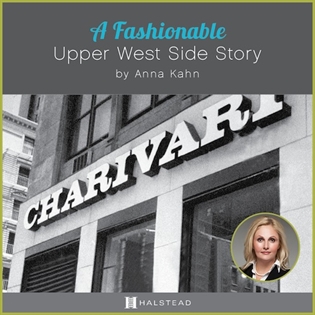 Barney’s, Bergdorf’s, and Bloomingdale’s have always been widely recognized names in the New York City fashion world. People travel from all over the world to walk along Fifth and Madison Avenues on the East Side to get their fashion fix, but, what about the West Side?

Back in 1967, the Upper West Side got its first taste of high fashion with the opening of Charivari. Charivari was a family business started by Selma Weiser and her daughter, Barbara, and son, Jon. The family had fallen on hard times, Selma had lost her job as a buyer for a department store in New Jersey and was going through a devastating divorce. The family was close to selling their home when Selma had the idea to open a store.

The family was able to find a dingy store on Broadway and 85th Street, the location at the time was not the most sought after, however, the rent was cheap enough for them to make it work. Within two weeks they were able to transform the store from shabby to chic and on the opening day hired a go-go dancer to garner attention. The Weisers desperately needed to sell at least 3 dresses in order to afford their rent, the amount of interest they got from the go-go dancer enabled them to sell over 50 in the first day!

Charivari means “uproar” in French and it was exactly that! Only a few years later in 1971 the fashionable family opened their second store on Broadway and 83rd, they opened a men’s store in 1976 on Broadway and 85th, another store on 81st and Columbus as well as a location on Columbus and 72nd. Business was booming and the Weiser’s success seemed to have no limits.

At the time of the fourth store opening, Charivari was the hottest store in Manhattan. A 14-year-old boy showed up at the grand opening in hopes of getting an autograph from Perry Ellis, and potentially a job at the store. The family was initially hesitant to hire someone so young but his eagerness and love of fashion made it hard to say no. That boy was Marc Jacobs. Marc Jacobs wasn’t the only designer to come to life thanks to Charivari, while on a walk in Paris, Barbara stumbled into a store and to discover the designs of Yohji Yamamoto. She ended up purchasing the entire collection, brought it back to America, and made him a cutting edge designer in the States.

While Charivari’s success on the Upper West Side was undeniable and seemed unstoppable with new stores opening, it was the Upper East Side that ultimately led to the demise of the company. Selma had always dreamed of having a store on Madison Avenue and had sought out to make that dream a reality. The Upper East Side location was significantly more expensive to both create and maintain, and the recession of the early 90’s made a huge impact on sales. The company suffered significant financial loss and had to start closing their stores. By 1998, the fashion empire had come to an end. In 2009 Selma passed away. While she is no longer with us, her memory will always live on as an Upper West Side legend.

We hope you enjoyed this highlight on Charivari by Halstead agent Anna Kahn. Anna is one of New York City’s top producing agents with twenty years of experience. She has been featured in the New York Times, Wallstreet Journal, and more as an expert New York City real estate agent. She provides a high level of customer service and invites you to email her any questions or comments that you have.