Balto Is No Ordinary Husky 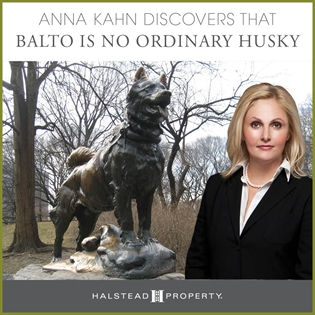 Balto was a black and white Siberian husky sled dog who led his team on the final leg of the 1925 run to Nome, Alaska to deliver a diphtheria antitoxin serum to combat an outbreak of diphtheria. The serum was first transported by train from Anchorage, Alaska to Nenana, Alaska and then was scheduled to continue to Nome via aircraft. However, the engine of the only aircraft that could quickly deliver the medicine was frozen and would not start. Officials in charge of the delivery effort decided the best alternative was to transport the medicine via multiple dog sled teams.

News coverage of the serum delivery was worldwide. Facing a blizzard with -23° F temperatures and strong winds, more than 20 mushers were part of a relay that covered over 600 miles of terrain. Balto proved himself to be a hero as his team completed its leg in near-whiteout conditions and almost entirely in the dark. The final team was asleep as Balto’s team made it to the final stop so they decided to continue on to Nome with the serum.

The statue of Balto, sculpted by Frederick Roth, was erected in Central Park on December 17, 1925, just 10 months after Balto’s arrival in Nome. Balto himself was present for the unveiling. The statue can be found on the main path leading north from the Tisch Children’s Zoo.