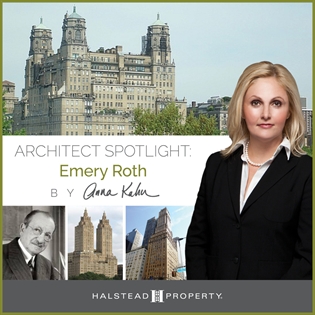 This Hungarian-born architect shaped our city in the 1920s and 1930s.   Roth’s family, destitute after the death of his father, sent the 13 year old Emery to America to seek his fortune.  Always sketching, Roth early on developed an interest in architecture and decided to make that his career.  At that time, the study of architecture consisted of making endless drawings of existing architectural details from Roman, Renaissance, Gothic and other period buildings. But he excelled in this skill, and ultimately landed a position designing buildings for the 1893 World’s Columbian Exposition in Chicago.  While there, he met and impressed Richard Morris Hunt, one of the pre-eminent architects of the period, and soon joined Hunt’s firm in New York.   He honed his skills, learning the structural side of the profession, and in 1898 bought an existing practice.   Over the years, Roth excelled in the design of the apartment house - a relatively new phenomena in New York.  While most other apartment house designs of that era incorporated long, narrow hallways with rooms on one or both sides, Roth perfected the Foyer layout, with separate Entertaining, Sleeping and Service spaces, all accessed from a gracious central Foyer.   He also incorporated the architectural detail from older two - five floor buildings time into the new much-taller “modern”  apartment house - imbuing such masterpieces as the Ritz Tower, The Beresford and the San Remo with a grace and elegance no longer found in today’s megaliths.